Home Events Dean Brody Added to Live From Inside Lineup 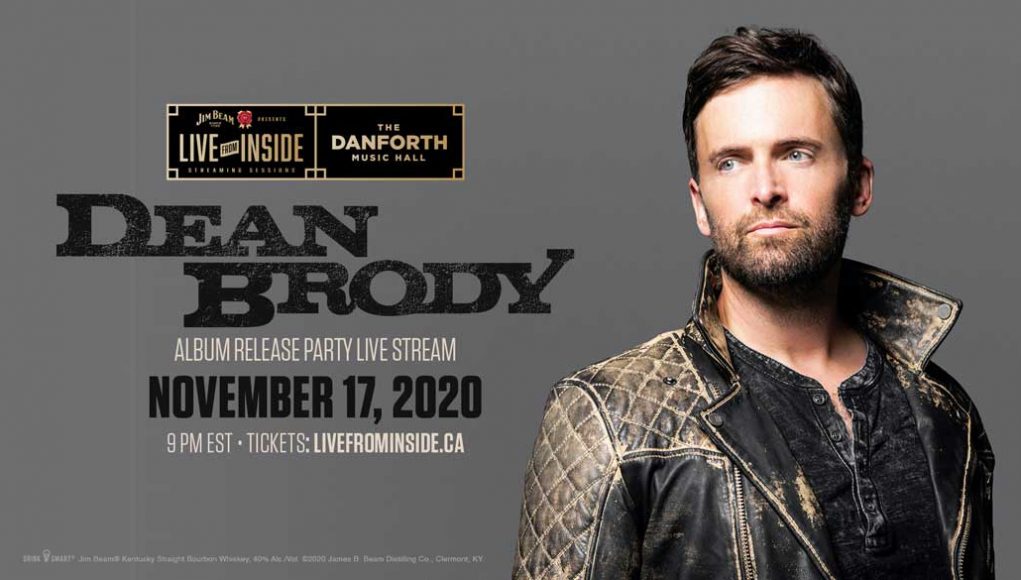 Dean Brody Added to Live From Inside Lineup

TORONTO, ON (Nov 2, 2020) – Jim Beam Bourbon Presents Live From Inside is excited to announce beloved country artist Dean Brody will perform a Fans First Release Party live from the Danforth Music Hall on Tuesday, November 17. Tickets for the virtual performance are on sale now at www.livefrominside.ca with a portion of ticket sales benefiting the International Justice Mission.

Since his debut single “Brothers” hit the US Top-40 back in 2008, Dean has risen and continues to remain at the top of the Canadian country landscape with an impressive 27 Top-10 singles (including 5 #1s), 17 CCMA Awards, 2 JUNOs, more than 185 million global streams and numerous gold and platinum (including 1 double platinum) certified singles. Only Shania Twain has more Canadian streams than Dean when looking at Canadian country artists’ “lifetime” results.

No country artist has owned the Canadian “Live” stage more than Dean in the past 5 years with three national arena tours (2 breaking ticket sale records), an acoustic national tour as well as headlining the biggest festival and venue stages.

In 2019, Dean signed with a new management team (Starseed Entertainment) and launched his own independent label “Scurvy Dog Music”. The label’s first single “Can’t Help Myself” (Dean and The Reklaws) not only hit #1 at Canadian country radio, and became the most-streamed Canadian country song in Canada released in 2020 to date. but it became the most spun single in a one-week period in the country format in the history of the Nielsen BDS era (25 years, including US acts). Dean recently broke this record with his follow-up single “Canadian Summer”.

Jim Beam Bourbon Presents “Live from Inside” showcases incredible live performances broadcast from favourite venues across Canada. Viewers enjoy multi-camera performances with crisp visuals and concert quality audio. Fans are able to purchase tickets, register for access, and then stream live performances in high definition from the comfort of their homes or on the go.

Tickets on sale now at www.livefrominside.ca