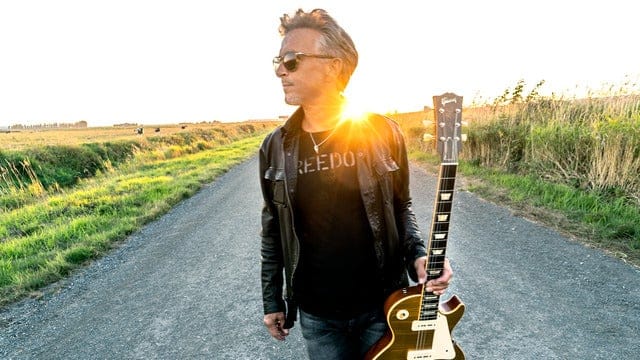 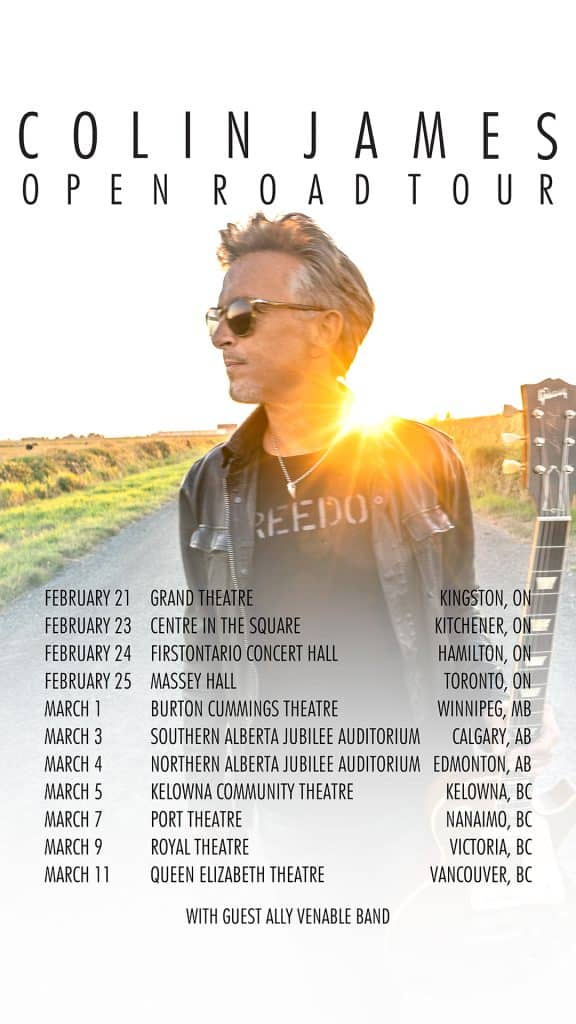 “I’m opening doors for you – walk through them.”
– Stevie Ray Vaughan

From the prairies of Saskatchewan to sharing the stage with arguably the greatest and most influential guitarists of all time, Colin James still remembers those words of advice given to him by the late, great, Stevie Ray Vaughan.
Colin James has taken those words to heart. His career has spanned over 30 years, with a track record that includes 20 studio albums, 7 Juno Awards, 27 Maple Blues Awards and multi-platinum record sales. His latest release, Open Road, is a celebration of personal connections. It includes original tunes written with long time collaborators such as Colin Linden, Craig Northey and Tom Wilson and reinterpretations of covers by a diverse group of songwriters including Bob Dylan, Albert King, Tony Joe White and others.
His 2018 album Miles To Go garnered worldwide attention, debuting on the Billboard Blues Charts and holding a position on the RMR Blues Chart for 24 weeks, 14 weeks in the top 10. He continues to sell out shows across Canada with over 80,000 tickets sold on tours over the past 3 years. Colin was inducted into the Canadian Music Industry Hall of Fame in 2013. Looking back over Colin’s career, it’s a timeline rich in highlights. His 1988 self-titled debut, featuring his two self-penned hits “Voodoo Thing” and “Five Long Years,” was the fastest-selling album in Canadian history. It won him his first Juno and an opening spot on tour with Keith Richards. His second album, Sudden Stop, featured his hit “Just Came Back,” which reached #3 on the U.S. radio charts and earned him the Juno Award for “Single of the Year.” Colin was next credited with launching the swing revival, thanks to his wildly popular Little Big Band, which has released four successful albums to date.
However, it wasn’t until 2016’s Blue Highways that James found himself on a blues chart: the album spent 10 weeks at No. 1 on the Roots Music Report’s Blues Chart. It also landed him one of his biggest hits: “Riding in the Moonlight,” a Willie Dixon song that garnered millions of streams on Spotify.
Over the years Colin has worked with some of the world’s most revered artists including, Bonnie Raitt, Albert Collins, Pops Staples, Robert Cray, Albert King, Keith Richards, Lenny Kravitz, ZZ Top, Mavis Staples, Luther Allison, Roomful of Blues, Bobby King and Terry Evans, John Hammond Jr., The Chieftains, Carlos Santana, Little Feat, Johnny Hallyday, Jeff Healey, and Buddy Guy. In addition to his own recording and touring Colin is a prolific songwriter, his music has been recorded by the likes of Maria Muldaur, Johnny Hallyday and Lucinda Williams. Upon his 2019 release Miles To Go, Colin earned the Juno Award for Blues Album of the Year, as well as 6 Maple Blues Awards in several blues categories. Colin has set the bar for consistency and talent in Canadian music and even after 20 acclaimed albums remains at the top of his game, always challenging himself musically. A consummate professional and a superb guitarist, Colin is a musician’s, musician. The confidence that comes with maturity can be heard in his voice and seen in his electrifying stage performance. He does what comes naturally – he always has – he knows no other way and no other life.