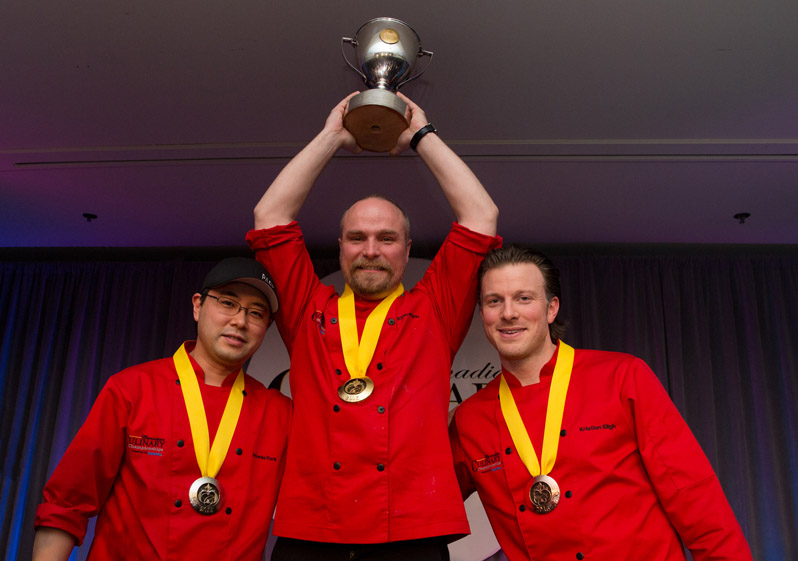 The competition was fierce, the determination was evident, as eleven of Canada’s best chefs competed for top honours during the coveted Canadian Culinary Championships on February 6 and 7, 2015 in Kelowna, B.C.The new Champion, Chef Ryan O’Flynn of the Westin Edmonton, won with his Terrine of pine smoked Alberta river sturgeon and cured Quebec foie gras, wild North West Territory morels, textures of Okanagan apples, and toasted brioche, paired with Sandhill Small Lots 2013 Viognier.  Chef O’Flynn’s reaction when he realized he won: “It feels great! It means a lot to the city. I’d like to thank the students of the Okanagan College. Thanks also to the Delta Grand – they treated us like royalty. Just great hospitality through and through. Thanks also to Starwood and Westin for supporting me.”Amid high fives, cheers, applause and tears the winners of the bronze and silver medals were announced. Chef Kristian Eligh of Hawksworth Restaurant in Vancouver took the bronze, and the silver was awarded to Chef Antonio Park of Park Restaurant in Montreal.  Dishes were Sablefish and lobster chowder in a bread bowl paired with Meyer Family 2012 Micro Cuvee Chardonnay, Old Main Road for the bronze; Bibimbap – Roulade of julienne vegetables, nine-hour braised shiitake+cauliflower, spinach, chicken boudin blanc, gochujang sheet, 63 degree/40 minute quail egg, crunchy assorted wild rice for silver.The two-day event started with a Friday evening Mystery Wine Competition where chefs prepared a dish they felt perfectly suited the mystery bottle of wine they had received less than 24 hours before. The wine was unveiled as Stoneboat Vineyards 2012 Pinotage from the Okanagan Valley. Chefs were given $600 to shop for ingredients to provide a small plate nosh for the 500 guests in attendance. Invited guests were able to taste the chefs’ creations and cast their own ballot. Emerging as the People’s Choice for this single event was Chef Mark McCrowe of Aqua Kitchen/Bar from St. John’s, Newfoundland.The Grand Finale at the Delta Grand Okanagan Resort and Conference Centre saw the eleven chefs competing in an all-out, slam-down competition. Dishes were partnered with their chosen Canadian winery/cidery. The evening was simply delicious, with the very best of Canada’s culinary scene fully evident.James Chatto, Gold Medal Plates’ National Culinary Advisor and Head Judge, was very impressed with this year’s competitors.  Experienced veterans, repeat Canadian Culinary Championship competitors and eager young bloods battled for the recognition to be called the best in Canada. “It was a fascinating competition. Going in, I felt we might have had the strongest line-up of chefs ever, with a very serious contender from every single city – some of them established stars, others dark horses with powerful experience. We were not disappointed! Their ingenuity and sensitivity in the Wine Matching Challenge wowed the judges and our new format for the Black Box gave each chef more of an opportunity to be creative, rather than just racing the clock. And then the Grand Finale… Kelowna gave the Championship massive support and hailed our brilliant new Champion with unforgettable energy and delight.”The Grand Finale event at the Delta Grand Okanagan was the most glamorous ticket in town. Playing to a sold-out audience of 640 wine and food enthusiasts were Barney Bentall, and Spirit of the West frontmen Geoffrey Kelly and John Mann along with guitarist Matthew Harder. Olympians in attendance included:

The evening’s Emcee, Jennifer Heil had this to say about the event: “It’s a pleasure to be in Kelowna and to celebrate the culinary talents and wine of the region as well as of the chefs from across the country.  I have been very touched by the support of the community for our Olympic athletes.”Stephen Leckie Co-Founder of Gold Medal Plates said, “I commend Kelowna and all of the Okanagan for supporting and helping to sell out all three of our events.  The contributions of the Okanagan wineries was also incredible.  This event shines the spotlight on Kelowna and we are thrilled to see the Canadian Culinary Championships thrive here.  A huge salute to the many volunteers, committee members and chair Judy Burns for leading such an excellent Championships! We’d also like to thank Tourism Kelowna for coming on as a Gold Sponsor this year. The city has truly embraced this competition in so many ways.”This memorable two-day event will be held in Kelowna until 2020, with proceeds from Gold Medal Plates and the Canadian Culinary Championships given to the Canadian Olympic Foundation to support high performance athletes.   To date, over $9.5 million has been raised.Photo by Yuri Akuney. Courtesy of Gold Medal Plates.For more information, visit the Gold Medal Plates website www.goldmedalplates.comThe Canadian Olympic Foundation – Beneficiary of the EventsNet proceeds from Gold Medal Plates are given to the Canadian Olympic Foundation to support athletes through high performance programs such as Own the Podium. To learn more about the foundation and the programs it funds, please visit www.olympicfoundation.ca