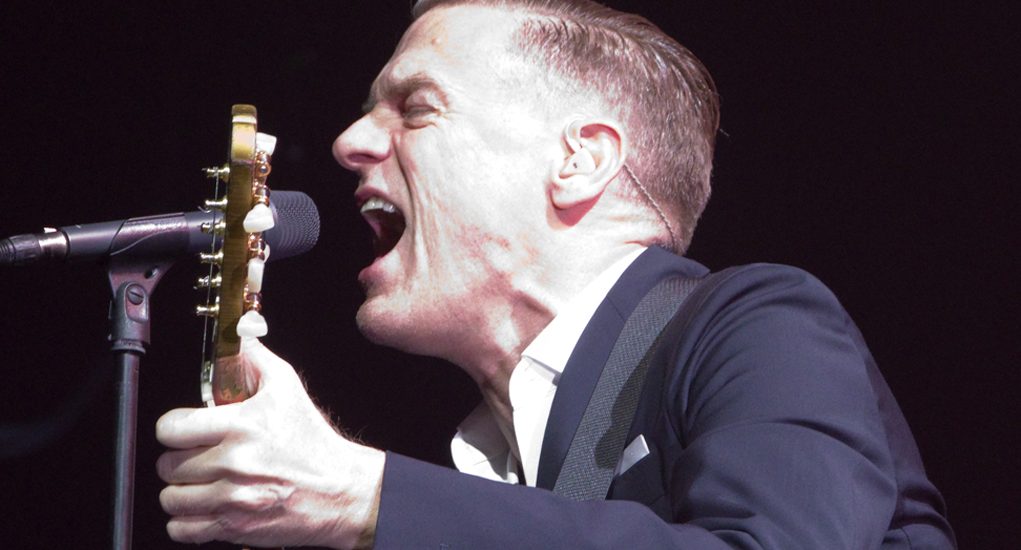 The hits kept coming as Canadian powerhouse entertainer Bryan Adams rocked a crowd of 5,400 at Prospera Place on June 10th during the Kelowna stop of his Ultimate Tour across Canada.

Before kicking off a high-energy, 27-song set that would play out over two hours to an eager, dancing crowd, Adams greeted his audience and promised a mixed selection of songs from across the ages.

“I don’t know if you have to get up early in the morning; it’s kind of a long show,” he told the cheering crowd.

The five-piece band wore black jackets over white shirts and dark pants, for a clean, monochromatic look. On stage behind the musicians, an enormous screen projected images and colour to wow the crowd.

Adams began with one of the new singles off his Ultimate album, “Ultimate Love”, an energetic number that talks about looking for love during turbulent times. He noted his number “Have You Ever Loved a Woman” was from the Don Juan DeMarco film soundtrack, Marlon Brando’s last film.

Adams may have entered the Canadian rock scene with “Straight from Heart,” a hit from his 1983 album Cuts Like a Knife, but thirty-five years later, his husky voice still rings true. All it took was a few bars of “Heaven”, from his 1984 album Reckless for the crowd to explode into cheers.

The song was so familiar to fans, Adams brought his microphone to the front of the stage, turned it toward the crowd, and conducted them in the first verse before joining in himself.

After picking up the pace with “This Time” (Cuts like a Knife), Adams moved into “It’s Only Love” (Reckless). The song originally featured Tina Turner. Adams told the crowd Turner couldn’t make it, but it would be all right because they had Keith Scott on lead guitar. Scott delivered some outstanding finger work on the guitar and back-up vocals throughout the concert. Scott and Adams often came together on stage, feeding off each other’s energy and clearly having a good time. They ran from corner to corner at the front of the stage, each musician giving a leap of joy when they crossed paths at center stage.

Adams followed up with “Please Stay”—a ballad filled with longing and the second new song from the Ultimate album. The crowd joined in singing as soon as they heard the first few chords of “Summer of 69” (Reckless).

Adams slowed the pace with an acoustic take on 2002’s “Here I Am”, accompanied by Gary Breit on piano. Adams invited the crowd to help him out as he performed “When You’re Gone” from the 1998 album On a Day Like Today, alone on stage with his guitar and 5,400 back-up singers.

No Adams concert could be complete without “Everything I Do”, from the soundtrack of the 1991 movie Robin Hood: Prince of Thieves, which sold more than 15 million copies worldwide.

Adams’ five-song encore included a rocking cover of “I Fought the Law” that had cameras panning the audience and displaying the video on to the giant screen, much to the crowd’s amusement.

Adams performed the last three songs alone on stage. After a cover of “Whiskey in a Jar”, a nod to his recent tour in Ireland, Adams got personal with the crowd, talking about growing up for a little bit in Vancouver and skiing Big White in Kelowna. He had a friend at a radio station in Kelowna and that station was one of the first to play his songs.

He told the story of seeing a piano in a store when he was walking down Granville Street and asking his mother to spend $1200 his parents had put away for his education on the piano.

Adams dedicated “Straight from the Heart”, a song he wrote when he was 18, to his 90-year old mother who he said would have been at the concert but was recovering from stroke. “She has determination like you would not believe,” he said, adding he had so much admiration for her.

Before starting into his final number, Adams asked the crowd to light up their cellphones. Prospera Place was illuminated with thousands of points of light that were projected onto the giant screen behind the stage, having a magical effect as Adams finished the night alone on stage with an acoustic version of “All For Love”, from The Three Muskateers original soundtrack, released as a single in 1993.