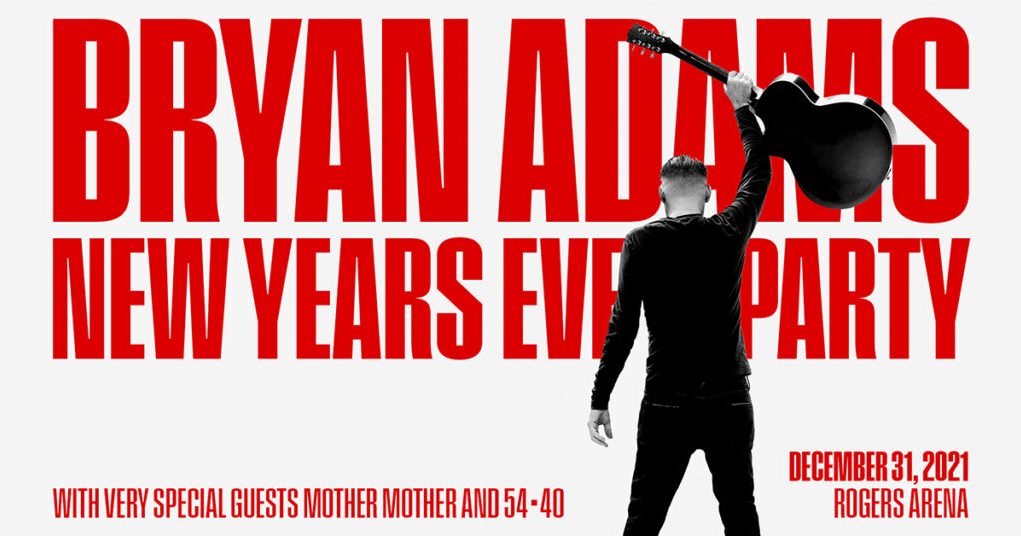 Hosted at Rogers Arena, Adams will be joined by fellow Vancouverites Mother Mother and 54-40 to close out 2021 and bring in the new year. As live entertainment makes its return, this event will mark the biggest New Year’s Eve celebration in Vancouver in decades, a welcome sign to begin a new year. Ticket prices will start at $20.21 (plus service charges).

Recognized as having one of the most influential music scenes across Canada supported by its rich history, Vancouver has helped birth the careers of some of music’s biggest stars to date. With Bryan Adams at the helm, supported by Mother Mother and 54-40, this event features a lineup of some of the city’s most notable names. Vancouver can expect a one-of-a-kind event, unlike any other New Year’s Eve celebrations the city has seen. The show will be a salute to Vancouver’s talent and legacy, shared across generations of music and fans, and a celebration of a long overdue return to the experience of live events.

Headlined by one of Canada’s most legendary singer/songwriters, Bryan Adams has fostered an astounding career, spanning over four decades long. With a string of number 1’s in over 40 countries, the multi-platinum artist shows no signs of slowing in 2022, having announced his fifteenth studio album So Happy It Hurts, set to release on March 11, 2022 followed by a UK headline tour. This New Year’s Eve event will mark Adams’ first hometown show in close to four years.

Mother Mother, comprised of Ryan Guldemond, Molly Guldemond, Jasmin Parkin, Ali Siadat and Mike Young, has had a whirlwind decade; over 1.3 billion streams and views, more than 15 million monthly listeners and counting on digital platforms, 2 million TikTok followers, sold out tour dates across the globe, a recent feature in Rolling Stone and a performance on The Late Late Show with James Corden, and 3.1 million Shazam searches.

Lead by songwriter Neil Osborne, 54-40 have carved out a legacy of gold and platinum albums and an outstanding reputation for their live performances that carries through to this day. A 54-40 concert is an extraordinary affair that bridges the gaps between generations through a shared love of music.

Following a year of major uncertainty for live events both nationally and globally, Live Nation Canada is ecstatic to see a return to live events, and to help bring music lovers an unforgettable night. Get ready, Vancouver, to ring in the New Year unlike ever before.