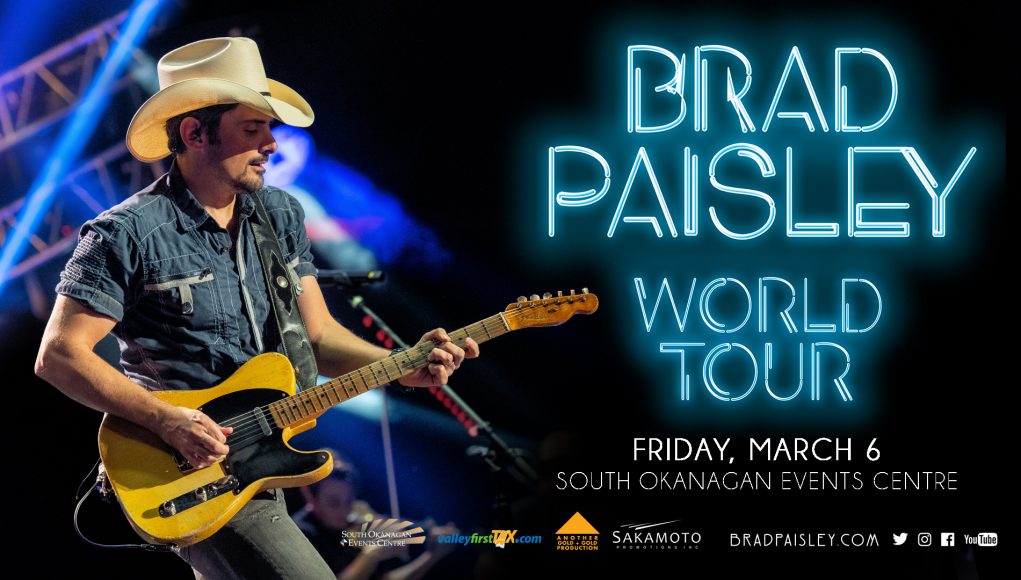 BRAD PAISLEY RETURNS TO PENTICTON FOR WORLD TOUR IN MARCH 2020

Country superstar Brad Paisley is set to bring his 2020 World Tour to the South Okanagan Events Centre in Penticton for a Friday night show on March 6, 2020.

Brad Paisley is a critically acclaimed singer, songwriter, guitarist and entertainer whose talents have earned him numerous awards, including three GRAMMYs, two American Music Awards, 15 Academy of Country Music Awards and 14 Country Music Association Awards (including Entertainer of the Year), among many others. He has been a proud member of the Grand Ole Opry since 2001. Paisley has written 21 of his 24 #1 hits and has accumulated over 20 million career total worldwide album sales, track downloads and streaming equivalents. Paisley’s 2019 World Tour just completed with eight sold-out shows in Europe and he now holds the record for a headlining country artist in all of the European venues played on this tour. Paisley is involved with a successful ongoing multi-year ad campaign with Nationwide Insurance, along with Peyton Manning. Paisley and his wife, Kimberly Williams-Paisley, are co-founders of a nonprofit organization called The Store, a free-referral based grocery store, which aims to empower low income individuals and families in the Nashville area. Go to www.thestore.org for more information. Paisley has partnered with Boot Barn® and developed an exclusive line of jeans, hats, T-shirts, jewelry, belts and woven shirts called Moonshine Spirit by Brad Paisley. Connect with Brad at www.BradPaisley.com, www.Facebook.com/BradPaisley, on Twitter @BradPaisley, on Instagram @BradPaisley, and YouTube at YouTube.com/BradPaisley.

Some of Paisley’s hit singles include “Mud on the Tires”, “Ticks”, “Waitin on a Woman”, “Remind Me” and most recently, “My Miracle”.

Tickets for Brad Paisley’s performance at the SOEC will go on sale to the general public on Monday, December 9, 2019 at 10:00AM and can be purchased in person at the Valley First Box Office, over the phone at 1-877-763-2849 or online at ValleyFirstTix.com.