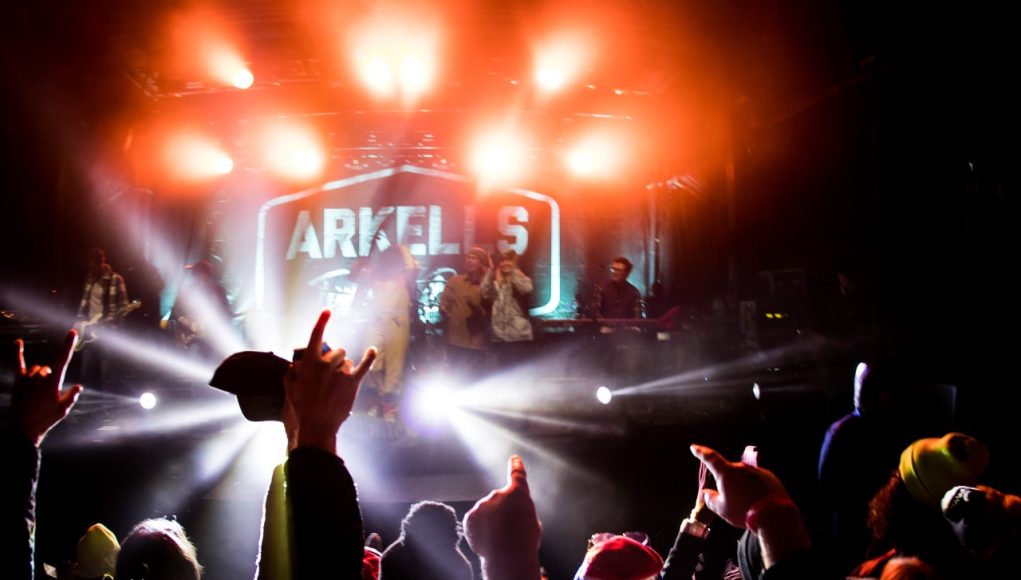 The clouds cleared and the sun spilled down onto the thousands of attendees who made their way up to Big White Ski Resort this past weekend.

I had my Gonzo Okanagan media laminate and made sure I had some long underwear on for when the night came and the sun dropped down behind the horizon.

It had been years since I drove the winding road up to the resort. At the base of the mountain, in the flats of Happy Valley, organizers Kurt Jory and Mitch Carefoot had a vast crew working the beer gardens, the security, the food and the vendors for everyone who was pouring in through the gates to see the show.

When I arrived I felt like I didn’t get the memo. Everyone was dressed in splashes of neon color. Bright yellows and pinks and blues spackled the growing number of music lovers as Kelowna’s DJ INVIZIBLE had everyone dancing in the snow before Vernon’s DAYSORMAY took the stage.

I had my camera ready. I was weaving my way through the crowd, asking people if I could take their photos. People played ladder ball and assembled small towers of beer cans to jump over and dance around. It had been over 2 years in the making for this event to take place. See ya later pandemic. Make room because more and more people flooded in to dance. I saw so many smiling faces and heard so much laughter I almost started to well up a bit. DAYSORMAY is a young group of talented musicians and their alt rock, synth, pop sound, reminiscent of bands like GLASS ANIMALS and PHOENIX started the whole thing off nicely.

LIGHTS came on soon afterwards. She electrified the mass of neon dressed attendees with songs like ‘salt and vinegar and when summer dies.’ When summer dies currently has over 11 million hits on Spotify. The surface of the snow was starting to ice up. I was hungry so I made my way down to the food trucks. The line ups. Holy smokes, I tried waiting in line for some grub but it took too long. I didn’t want to miss too much of the show so I went back up. Food would have to wait.

The security wouldn’t let the media backstage or in the ‘pit’ up front. They cited security and safety issues so, as a photographer, myself and all the other media personnel had to make due and get the shots we could. Personally, I didn’t want to shoot the show from far away. My style is to get right in there, up close. However, the crushing throng of the crowd had now filled the whole area. I looked out onto a sea of people as the sun finally dipped down and night joined the fun. If I was going to get any photos worth while, I was going to have to fight to get them. I have a history with the Arkells. Back in 2013, Kelowna had one of the best music festivals going. It was called KELOHA MUSIC AND ARTS FESTIVAL. It took place on the shores of Okanagan lake and on the Island Stage of Kelowna’s grassy amphitheater. It was a small venue and the organizers had turned one of the beaches into a stage. There is something to be said about watching live music while wading in warm water. My girlfriend back then, her and I had realized we were late to the show and I remember running to the venue, clearing security and cresting the small hill to see the Arkells singing, Michigan Left, one of their newer releases back then. We made our way and crowd surfed together to their set. It was a time that seemed simpler back then and as the Arkells took to the stage, all these years later, they sure didn’t disappoint.

After the success of their latest album, BLINK ONCE, and with the release of their latest single, RECKONING, the Hamilton alt-rock band had the entire place singing and dancing. It was the ushering in of a new era of live music. LIGHTS joined them on stage and covered ABBA. Talk about injecting some funk into the mix. As the night died down, ARKELLS lead singer Max Kerman asked everyone to light up their phones and we all did. I turned my phone on and recorded a little bit of the moment. It was like a starry night that went on forever out into the darkness, somehow symbolizing all the hope and light that has been pulled up from the fear and uncertainty of the past two years of this pandemic. Yes, the lineups were long. I never got to eat until I went home after the show. I had to wait in line for the bathrooms. I had to fight like hell to get into position with a $2000 dollar camera in my hand since I couldn’t get backstage like I had hoped. It was packed. I felt the compressing surge of the crowd and nearly fell over a number of times. My throat hurt from all the shouting and cheering and you know what? It was simply AMAZING. All of it. I feel so utterly grateful for all the griping I used to do before the pandemic changed my perspective.

It was a true delight to witness such a triumphant return to the live show and now, I have some of my favorite bands in my portfolio and adding DAYSORMAY, LIGHTS AND ARKELLS to it puts a smile on my face. Way to go to everyone who put this on and I can tell you this, dear reader, when DENIM ON THE DIAMOND comes around later this year, you know I’ll be somewhere in the scrum, fighting like hell to get my photos and loving every damn minute of it.