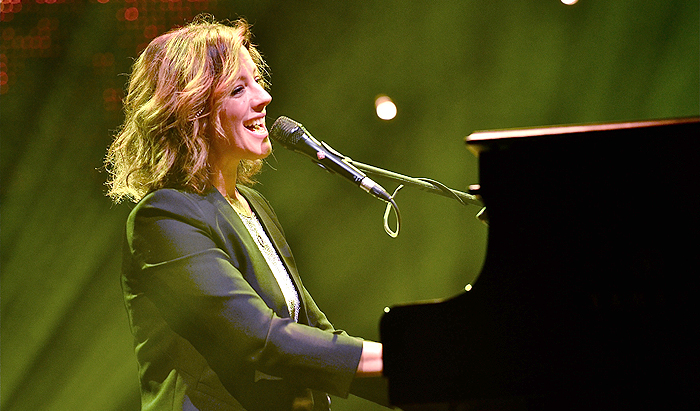 Sarah McLachlan charmed her way into the hearts of all those in attendance at her Friday night concert at Prospera Place. Perhaps charm is not the right word. She has a realness, a genuine way of performing and speaking that removes the barrier between performer and audience. She just is. Her tour features songs from her new album, Shine On, as well as the favourites that have become part of the tapestry of our lives. You know the ones I’m talking about. The songs you crank up and sing aloud in the kitchen, and the ones you play over and over again as you sob on the couch recuperating from a break up.

McLachlan’s four-piece band was remarkable with Joe Shearer on guitar, Jon Evans on bass, Vincent Jones on keyboards and Curt Bisquera on drums. Shearer and Evans were impeccable in their delivery of back up and harmony vocals throughout the show, especially during World on Fire.

McLachlan also answered questions audience members had written down. Friday night, someone asked about her most exciting sexual position and was she singing at the time. McLachlan laughed it off, and with the grace of a diplomat politely stated she wasn’t going to tell.

The night was a weaving of old songs and new, with McLachlan either on piano, electric guitar, acoustic guitar, or simply standing and singing her heart out. Old favourites like Adia, Sweet Surrender, Ice Cream and Angel were brought out and made new. New songs like Flesh and Blood, Song for My Father and Beautiful Girl had a newness, yet were somehow familiar. There were moments where she talked of her children, the pain of her divorce and the reawakening of love in her life. As she tells it, he walked in the door and she thought, “yummy!” Then he took her fishing and the rest was history. (She is currently dating former NHLer Geoff Courtnall, who is, without a doubt, yummy.)

Despite the almost full capacity crowd, McLachlan had a way of making the evening seem intimate. As one audience member said during intermission, “It felt like she was talking directly to me, it feels so personal when she speaks.”

Aside from sharing the sheer beauty of her flawless mezzo soprano voice as she meandered from song to song, she took some time to remind the audience of a few simple truths. “We all have the power to create good in this world,” and  “It’s the hard stuff in life where you learn the most.”

To that I reply – thank you Sarah McLachlan, for getting over the stage fright you had as a child. Thank you for sharing the passion, the joy, the heartache, the ups, and the downs, and especially the recognition of the growth you’ve achieved since we first started listening to your songs.

Everyone needs a soundtrack for their lives, thank you for creating one that fits so well with ours.