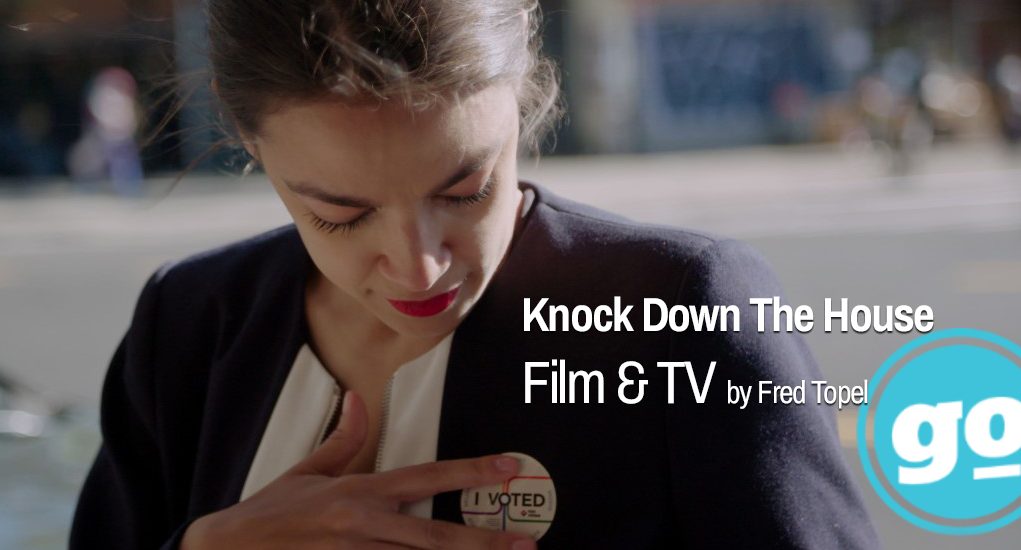 Last year, Alexandria Ocasio-Cortez shook up American politics by winning a congressional seat in New York with no previous political experience. She’s been making headlines ever since. Fortunately, there was a documentary crew following her campaign, so director Rachel Lears landed on one incredible film with Knock Down The House.

Ocasio-Cortez wasn’t the only candidate Lears followed. The film also followed Cori Bush, Amy Villela and Paula Jean Swearengin. By the time the film premiered at Sundance, Ocasio-Cortez was already in Washington so she had to Skype in for the post-film Q&A. Gonzo was there to hear her speak and Knock Down the House will be in theaters and on Netflix May 1.

Q: What do you think of the film?

AOC: This is my first time seeing it in its final form. I’m still recovering from the tears myself but I’m just so glad that this moment for all four of us was captured and documented, not just for personal meaning of it but for really everyday people to see that yes, this is incredibly challenging. Yes, the odds are long but also yes, that it’s worth it and that each and every person who submits themselves to run for office is doing a great service to this country, including Amy, Paula and Cori.

Q: What was the moment where you finally decided you were going to step up and do this?

AOC: Actually, you all saw the moment. It may not have been the actual click of recognition, but early on in the film, you see us in a conference. Cori was right there. She’s sitting across the table from me and it was really this thing when we had been drafted by Justice Democrats and Brand New Congress. It was this point where they approached each and every one of us, all four of us, “Are you all open to running?” They asked a lot of people actually. At some point, they all flew us out when we were still mulling over this question. Cori and I decided to run on the same day. It was very emotional and it really did feel like when I heard Cori’s story and when I heard so many of the other folks’ stories, it felt like we were really in this together. It felt like a pact in a way.

Q: The movie shows just how much it takes to mount a political campaign. Where do you summon the strength, time and money to go through the campaign process?

AOC: I think one of the things that doesn’t get discussed a lot is the immense personal cost, the spiritual cost, the material cost and the future cost because when you lose or if you lose, there’s a huge risk in the aftermath of that as well. Even when you win, there’s a huge cost as well, spiritually too. I think that one of the things that all four of us faced in our run was this idea that we had to combat very early on that a lot of other candidates don’t have to combat, which is this idea of viability. We would, from day one, people did not give us the chance that they sometimes give to other candidates on day one. A lot of that has to do with our preconceived notions of who looks like a person that can win a congressional race or where that person comes from. I think overall we need to realize that our democracy does belong us and when we don’t participate in it, when we don’t invest in it, when we don’t put our own energy into it, what we are doing is that we are giving it away to somebody else. And we give it away to usually a very small group of people. In terms of where to summon the strength, as was conveyed in the film, I know that the four of us and everyone who did run has this very core personal story where us running did not feel voluntary. It was really a spiritual significance. That’s really the only place where that kind of endurance can come from because a lot of us, it’s double duty. It’s multiple jobs. It’s humiliation, to be frank. I think we have opened a door and what I’ve talked about in my term is what I would like to do in the next two years is to hold the door open so that a lot more people can walk through.

Q: What advice would you give to students who may see the film and be following your political career?

AOC: Despite how the world can make you feel and despite the fact that the world can make you feel small and powerless, know that your belief in yourself is equal to how much power you have in this world. You need to believe in yourself and you need to believe in your capacities because you have them. Our talent in our community is the most precious resource that we have.

Q: Any final thoughts as you go from this screening back to work in Congress?

AOC: I hope everyone walks away knowing that we are still in a mode where it’s all hands on deck for our democracy. This is not just about the President of the United States. He could be gone tomorrow and that will not change the systemic injustices that led to his election. So it’s important that we continue to be all hands on deck in this fight. We are so early on. We can do 2018 again better in 2020. So when someone tells you that they’re going to run for office, believe in them early. Don’t dismiss them and know that we all participate and when we all know what we have to give and when we choose to give it, our nation will be better. We have no other choice.