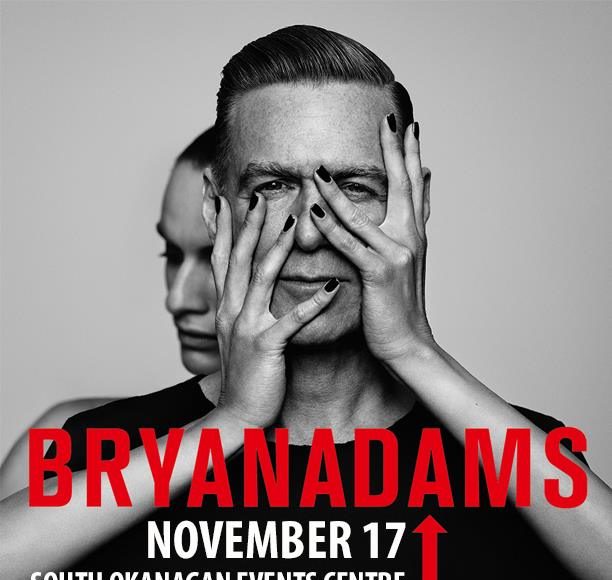 THE GET UP TOURSO GET UP and GET OUT THERE!

THURSDAY, NOVEMBER 17, 2016SOUTH OKANAGAN EVENTS CENTRE – PENTICTON, BCDoors: 7:00PM – Show: 8:00PMTickets on sale Friday, September 30 @ 10:00AMTickets available in person at the Valley First Box Office (at the SOEC)Charge by phone at 1-877-SOEC-TIX (763-2849)*Order online at www.ValleyFirstTix.com*Tickets (incl tax): $69.00 &99.00*(*Additional fees only apply)”Mesmerising, magical and memorable – thank you, Bryan”- Chronicle Live, Durham, UK”As well as showcasing tracks from Get Up…Bryan reminds us why he sells out arenas across the country as he belts out some of his all time classics”- All About The Rock, Lytham, UK”Adams proved he is still the total package with his amazing guitar skills, his vocal ability and good looks backed by a band that was spot on the entire show”- Music Blend”…the entire two hours he was on stage, Adams commanded the complete attention of this rollicking crowd”-The Loop, Newcastle, Australia”Adams brought back memories.  He made them alive.  He brought backs his hits, but the biggest thing he brought back was the crowd’s youth”- Edmonton Sun”…a rock solid performance from the singer/songwriter/producer …who hasn’t lost an ounce of his likeable onstage persona nor his showmanship”Creative Loafing – TampaMulti-platinum, recording artist Bryan Adams has announced his return to select cities in Western Canada this November with ‘The Get Up Tour’ in support of his thirteenth studio album ‘Get Up’. Full dates are below. Tickets go on sale at 10am on Friday, September 30 from www.livenation.comGet Up is a body of work that Adams is truly proud of and with multi-instrumentalist, songwriter, producer Jeff Lynne (The Beatles, Paul McCartney, Randy Newman, Traveling Wilburys) at the helm shaping the record, Get Up sits nicely alongside Adams’ earlier classics.As Canada’s best known ambassador, Bryan Adams has spent the last three decades making music history. He has sold upward of 65 million records, toured six continents and achieved #1 status in over 40 countries around the world. He has been awarded the Order of Canada, has been inducted into the Canadian Music Hall of Fame and has a Star on Canada’s Walk of Fame. Adams has been nominated for, and won several Academy Awards, Golden Globes and Grammy’s, has a Star on the Hollywood Walk of Fame and has been inducted into Wembley’s Square of Fame.BRYAN ADAMS THE GET UP TOUR CANADIAN DATES:NOV 17 PENTICTON, BC SOUTH OKANAGAN EVENTS CENTRENOV 18 KAMLOOPS, BC SANDMAN CENTRENOV 19 PRINCE GEORGE, BC  CENTRENOV 20 GRANDE PRAIRIE, AB  REVOLUTION PLACENOV 22 RED DEER, AB  ENMAX CENTRIUM AT WESTERN PARKNOV 23 MEDICINE HAT, AB CANALTA CENTRENOV 24 BRANDON, MB WESTMAN PLACE AT THE KEYSTONE CENTRE